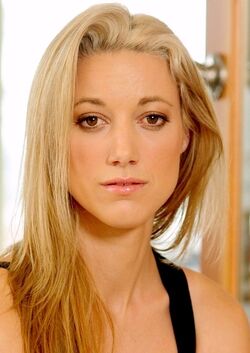 Zoie Palmer is an English-Canadian voice artist and film, television, and theatre actress.

Born in Camborne, Cornwall, England,[1] to parents of Irish and British descent, Palmer was nine years old when she moved with her family to Canada,[2] and grew up near Lake Simcoe in Georgina, Ontario, Canada.[3]

Zoie Palmer's interest in acting began at an early age. She did community theatre growing up and took drama classes in high school.[2] Her first professional experience as an actor was as a teenager in summer stock at The Red Barn Theatre in Jackson's Point, Ontario.[4]

She attended Sacred Heart Catholic High School in Newmarket, Ontario; and studied theatre arts at York University in Toronto, Canada, graduating with a Bachelor of Fine Arts in 2001.[5]

Her sister, Tracey (Palmer) Weiler,[6] was a Progressive Conservative Party of Ontario candidate (Kitchener-Waterloo electoral district) in a 2012 by-election for the Legislative Assembly of Ontario, and the 2014 general election.[7] Palmer lent her star-power to a crowdfunding campaign organized by her sister on Indiegogo, to raise funds for a popular children's attraction at the Winterloo Festival 2015 for families in the Waterloo Region (the sold out perks included 100 autographed pictures and 25 one-on-one Skype calls lasting 10-15 minutes.)[8]

Zoie Palmer came out publicly at the 2014 Canadian Screen Awards when after receiving the "Fan Choice Award for Favourite Canadian Screen Star" she thanked "my incredible partner Alex...." They have a son.[9][10] [Alex Lalonde is a Canadian film and television producer, and board member of WIFT-T (Women in Film & Television Toronto).  Her credits include films The Whistleblower (2010) and The Lesser Blessed (2012).[11][12]]

Palmer got her start in television in 2002 with a guest spot in the Canadian science fiction series Odyssey 5.[3] Television work includes the critically acclaimed made-for-TV movies The Reagans (2003) as Patti Reagan, and Out of the Ashes (2003) as Didi Goldstein. Guest appearances include the Citytv crime drama Murdoch Mysteries in the episode "Victor, Victorian" (2010) as Katie Powers, a member of a group of women posing as men; The CW American espionage drama Nikita in the episode "Girl's Best Friend" (2011) as Anya Vimer, a terrorist who tries to sabotage a peace summit; Showcase conspiracy action thriller XIII: The Series in the episode "The Irish Version" (2011) as Moira, the bartender in an Irish pub; HBO Canada comedy Call Me Fitz in the episode "Don of the Differently Abled" (2011) as Laura, an unhinged amputee with plans for an escort service for disabled people; CTV fantasy crime drama The Listener in the episode "The Shooting" (2012) as Staff Sgt. McCoy, an investigator for Internal Affairs. She had a recurring role in the CTV teen drama/comedy series Instant Star as rock singer Patsy Sewer (2006-2007); and was a co-lead in the Global drama The Guard as Coast Guard rescue specialist Carly Greig.

After Lost Girl concluded she joined the main cast of the science fiction series Dark Matter (2015) in the role of The Android.

Film credits include Annabelle in the short drama Terminal Venus (2003), in which she played a woman coming to terms with cancer; Angie in the Genie Award nominated short drama Snapshots for Henry (2006); Haley in the romantic comedy The Untitled Work of Paul Shepard (2010); Officer Frances Jane in the crime thriller Cold Blooded (2012); Lou in the comedy Sex After Kids (2013); and Bethany in the fantasy adventure Patch Town (2014). 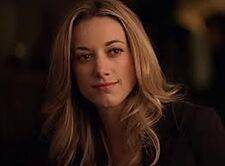 Palmer was awarded the "Gold Medallion Acting Award for Best Actress in a Feature Film" by the 2012 Bare Bones International Film Festival for Cold Blooded;[13] and "Best Actor" by the 2004 Baja Film Festival (Mexico) for Terminal Venus.[14]

She was nominated in 2014 for "Multimedia / Best Female Performance in a Feature" by the Canadian Comedy Awards for Sex After Kids;[15] and in 2011 for "Outstanding Performance – Female" by the ACTRA Awards for The Untitled Work of Paul Shepard.[16]

Palmer received the "Fan Choice Award for Favourite Canadian Screen Star"  by the 2014 Canadian Screen Awards;[17][18] and was named "Number 1" on the list of homegrown talent by HELLO! Canada magazine in its 2014 edition of "Canada's 50 Most Beautiful" celebrities.[19]  She was winner of "Favorite TV Actress" by the 2013 AfterEllen Visibility Awards;[20] "Best Sci-Fi or Fantasy Actress"  in Best of TV Awards 2013 by Canadagraphs;[21] and "Girl on Top 2013" (Favorite TV Leading Ladies) by E! Online (E! Entertainment Television).[22]

As like her character on the show, Zoie is a unicorn of awesome.

She played a special role in the following episodes:

She did not appear in the following episodes:

Zoie Palmer’s love of acting began at an early age. Raised in Cornwall, England, Palmer moved to Toronto to pursue her career where she graduated from York University’s Theatre Program with a B.F.A.

Palmer has appeared in an array of television productions, notably starring as Ronald Reagan's daughter, “Patti”, in The Reagans, the critically-acclaimed MOW that was nominated for a slate of Emmy Awards and a Golden Globe. Palmer also appeared in the Emmy Award-winning TV movie, Out of the Ashes, co-starring alongside Christine Lahti and Beau Bridges. One of Zoie’s best known roles is as Goth musician “Patsy” in the series Instant Star. Palmer also garnered notice for her role as Coast Guard rescue swimmer “Carly Grieg” in the Global series, The Guard. She has guest starred on such shows as Odyssey 5, Bliss, Doc, 1-800-Missing and Murdoch Mysteries. Currently, she can be seen playing the role of “Lauren”, scientist to the Fae, in the Showcase series Lost Girl.

Palmer’s film career is quickly catching up to her television success. She has starred in two acclaimed short films: Snapshots for Henry, which was nominated for a Genie Award as Best Live Action Short Drama, and Terminal Venus, by Alexandre Franchi, for which she was honoured with the Best Actor Award at the Baja California Film Festival. 2010 was an especially busy year for Palmer as she landed a supporting role in M. Night Shyamalan’s thriller Devil, along with her starring role in The Untitled Work of Paul Shepard, for which she was nominated for a prestigious ACTRA Award. She was recently reunited with her co-star from The Guard, Ryan Robbins, in the crime thriller Cold Blooded, and has most recently finished filming the comedy Sex After Kids, written and directed by Jeremy Lalonde.

Exclusive: Zoie Palmer on the Final Season of Lost Girl
May 1, 2015. SciFi Vision

'Lost Girl' shows off the fan love at the Canadian Screen Awards [Video]
March 29, 2014. The GATE

Zoie Palmer comes out at Canadian Screen Awards
March 10, 2014. Oh No They Didn't

Zoie Palmer thanks partner and son at the Canadian Screen Awards
March 10, 2014. AfterEllen

Number 9: Lost Girl
This Canadian cult series about a succubus has gained a following in the United States as well, and Bo's (Anna Silk) relationship with Lauren (Zoie Palmer, as one of Bo's two lovers on the show) has been the subject of much discussion by "Lost Girl" fans online.

Toast of the Coast: Zoie Palmer stars in the search-and-rescue series The Guard
October 18, 2009. The Ottawa Sun