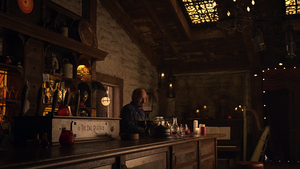 The Dal Riata, more commonly referred to as The Dal, is the only Fae pub in the local territory. Trick is its proprietor and bartender.

The Irish-themed pub is a Way Station, a neutral ground for members of both Light and Dark clans; and the place where non-local, traveling Fae in the territory check-in. It also serves as the setting for La Shoshain celebrations.

In The Dal, Fae do not have to hide who they really are.

While The Dal appears to be a normal bar on the upper level, Trick lives within a large chamber in the basement where he has a few things hidden away.

The area beneath the tavern contains a library of information with ancient Fae books that not even The Ash and The Morrigan are aware of; a vault for rare and precious artifacts; a tunnel system used to transport Fae and to escape through; and cells in a lower level (to restrain; and to kennel Under Fae, such as a Satyr).

Bo and Kenzi spend a lot of time hanging out in The Dal, as do Dyson and Hale, and to a lesser extent Lauren.

(Seen or mentioned throughout the series.)