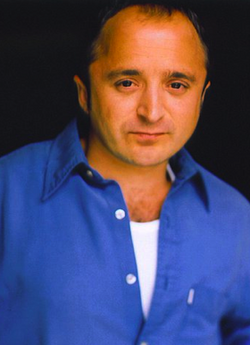 Rick (Richard) Howland is a Canadian film and television actor, and musician.

Howland began with improvisation and an excellent acting teacher. He then spent a few years at a few universities before landing his first gig in a feature film. While at York University he formed the comedy troupe the "Four Strombones". The Strombones performed in comedy clubs around Toronto, Canada, for more than a decade as well as creating a very successful fringe show in 1994. He has hosted comedy shows as well as dabbled in standup comedy. He co-wrote a sit-com called "Rick’s Life with Adam Nashman", an industry-based show that offers up the funny through Rick’s own unique perspective.

As a songwriter Rick has been at it since he was seventeen. He spent most of those years practicing and writing on his own. Howland has two self-recorded albums - one done in a studio and one done in a living room.

Howland appeared as Trick in the following Lost Girl webisode:

Actor and singer/songwriter Rick Howland plays the role of “Trick” -- the bartender with a secret -- in Lost Girl Seasons 1 - 3. Staying in the Canadian Sci-Fi series genre he guest starred in Sanctuary. Rick played Hockey League Commissioner, “Harry Buttman,” in Canada’s top-grossing film Bon Cop Bad Cop and also starred opposite rock legend Meatloaf in the feature film To Catch A Yeti. His short film credits include the award-winning Santa Baby, Short Tongue Freddy and Martiro. Selected MOW’s include Jesse the Body Ventura Story, Tin Man and Crazy for Christmas. Howland wrote his own stand-up routine for Club Land, which was directed by Saul Rubinek. He has shared the small screen with the legendary Jayne Eastwood in Endless Grind and conspired with Peter Stebbings in Traders. Other television credits include Billable Hours, Murdoch Mysteries, The Royal Canadian Air Farce, Sue Thomas F.B.Eye and Train 48.

Selected theatre credits include: Veriété (Volcano), Shooting Penguins (Factory), A Short History of Night (Factory) and Lion the Witch and the Wardrobe (LKTYP). Howland was also a writer and performer in the Four Strombones comedy troupe that toured Toronto’s comedy clubs for 12 years.

Rick has written numerous scripts and has recently directed his first short film, Underwritten. You can find his two indie albums on iTunes and Amazon.

Lost Girl's Rick Howland: There Are Many More Pages to Trick's Story
December 4, 2014. The Televixen

Interview: Rick Howland on Syfy's 'Lost Girl' and his part in The World Of Fae
September 5, 2011. Monsters and Critics

Retrieved from "https://lostgirl.fandom.com/wiki/Rick_Howland?oldid=47040"
Community content is available under CC-BY-SA unless otherwise noted.