Mirror, Mirror is the fourth episode of Season 2.

In a move of sisterly solidarity, Kenzi drunkenly invokes the Russian hag Baba Yaga to curse Dyson for his behaviour towards Bo. In the sober light of day, however, Kenzi and Bo seek to remove the curse. 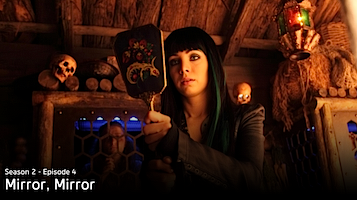 Kenzi, while drunk, accidentally invokes the witch Baba Yaga in order to put a curse on Dyson for breaking Bo's heart. Dyson discovers that all women now hate him and becomes furious with Kenzi; he accuses her of meddling with things she doesn't understand, and being a stupid human. Kenzi tries to lift the curse by seeking out her aunt, a fortune teller, for help. They manage to summon Baba Yaga and Kenzi sacrifices herself for Bo, becoming trapped in Baba Yaga's realm. Bo agrees to work for the Ash in return for getting help to save Kenzi. Bo enlists the help of Chloe, a Water nymph, in the attempt, and nearly drowns, but is revived by Dyson. Kenzi manages to defeat Baba Yaga by shoving her into her own oven, and breaks Baba Yaga's mirror into pieces, giving them to Baba Yaga's captives, allowing them to escape as well. Kenzi promises to be more careful going forward and encourages Bo to keep fighting for Dyson and Lauren and for what makes her happy.

PLOT NEEDS TO BE FLESHED OUT, IMPROVED, AND TAILORED FOR WIKI.