Fae-ge Against The Machine is the eighth episode of Season 3.

What was meant as a much-needed night off for Bo grows into a scavenger hunt in a lawless Dark Fae territory. In Bo’s absence, Trick is placed in a precarious position with potentially dire consequences. 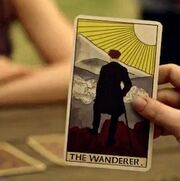 [ The following plot recap was imported from the Syfy (U.S.) website. ]

Bo's Dawning trainer, Stella, is making Bo chase the cricket of good fortune, but when she fails, Stella gives her the day off. Bo fiddles with a weird, steampunk-y machine in the Dal while calling Lauren with news of her day off, and Lauren is thrilled: She won a prestigious, last-minute research prize, and the award dinner is that night! Bo says she'll get fancied up and meet Lauren at her place, but she's waylaid by Tamsin, who drags her to a Dark bar to level with her about what a ball buster the Dawning really is.

Bo thanks Tamsin for the discouragement and gets up, but she's blocked by a group of Dark thugs who don't like how much time the unaligned succubus spends with the Light. She and Tamsin fight their way out, aided by a ruddy stranger. Bo thanks the man, whose name is Balzac, and says she owes him one. He holds out his hand, and before Tamsin can stop her, Bo shakes it.

Turns out Balzac is a spriggan, a fae you can't escape until you've fulfilled any arrangement you may have with them, as Bo now does. He leads her and Tamsin to the lair of a crime boss named Fang, where Bo succubus-es the boss and grabs what they're there for - a fortune cookie. No, seriously. But her tongue gets thick and she can't talk right, an effect of the game Bo inadvertently activated when she messed with that weird machine, which is actually a test she'll have to pass in order to be invited to the temple of the Dawning. Since Bo isn't present at the Dal to play the game, Trick has to play in her stead, and every move he makes effects Bo in the real world. If he doesn't choose right, and she doesn't overcome the obstacles, things will end very badly. This choice was not so bad: Trick was forced to feed the machine poison, and Bo only got a temporary speech impediment, but the potential is for something far worse.

Balzac tells Bo that the ultimate goal is to free a young fae named Hannah from a place called Brazenwood, a lawless land, where she's being exploited. Tamsin refuses to go to Brazenwood, but tags along as long as she can. As they reach their first threshold before Brazenwood, Bo must choose a tarot card from the gatekeeper, while back at the Dal, Trick must choose one of two images for Bo's next step: an infinity symbol, or a pit of snakes. He chooses infinity, and Bo chooses The Wanderer from the deck - an image of destruction and doom. The gatekeeper shakily writes them a prescription - what for, Bo doesn't know - as Balzac's nemesis, Whitman, starts shooting darts their way. Balzac distracts him while Bo and Tamsin go forward, and Trick is forced to feed the machine a cocktail, making Bo immediately drunk. They reach the gate of Brazenwood, itself, and Bo is prepared to bid Tamsin farewell, but the valkyrie continues the journey. They hand the fortune cookie to the second gatekeeper, who chuckles and admits them to Baddie Town.

Bo shakes off the alcoholic stupor as they reach a pharmacy and hand the proprietor the prescription. On opening the door, they see a young girl - Hannah - crying into a complex machine, and Tamsin explains to Bo that the girl's tears are a powerful drug sold on the fae black market. They unhook her just as Whitman and the sheriff arrive to hold them to Brazenwood rules. If Bo wants to leave with Hannah, she'll have to defeat Whitman in a duel, using the knife in her boot as her only weapon.

They square off, and Whitman replicates himself into another full man. Bo must use her good fortune-cricket training to decide which is the real man, and without thinking about it, she turns 180 degrees and flings her knife at the real Whitman - the one standing behind her - and kills him. The machine at the Dal is still, the game is won, and Trick and Stella celebrate with a kiss, which translates into Brazenwood as Tamsin rushing Bo and kissing her. Bo is surprised but says nothing, and they hurry back to the Dal, where Balzac is waiting with an invitation to the Dawning. He was the agent of the game all along, but Hannah is very real and now, very safe. She drops her tears into the machine, making Bo's Dawning invitation official.

Bo runs home to find Lauren, but she's out having a drink with a scientist who went to the awards ceremony specifically to see her. Tamsin consoles her, and Bo gives the woman her thanks for her prodigious gift of help. She shrugs it off and leaves, and as she walks through the moonlight, showers of cards bearing the image of The Wanderer fall from the sky, and Tamsin realizes she's involved in something very, very bad.

PLOT IS TEMPORARY MEASURE COPIED FROM SYFY. PLOT NEEDS TO BE REWORKED, IMPROVED, AND TAILORED FOR WIKI.