Evony Fleurette Marquise is a Dark Fae Leanan Sidhe and The Morrigan.

The Morrigan appeared with two of her Dark Fae bodyguards, upon hearing of Bo, the unaligned succubus. She and her guards go to The Ash's Light Fae headquarters. Lauren attempts to stop her but to no avail as The Morrigan insisted on seeing Bo and pushed past the human.

She interrupted The Ash's interrogation of Bo, wanting Bo for the Dark Fae. When The Ash orders Lauren to take Bo for analysis, The Morrigan orders her guards to take Bo instead. Though some fighting between the Light and Dark occur, The Ash soon puts a stop to it, telling The Morrigan that Lauren needed to examine her, and that the two of them needed to talk. 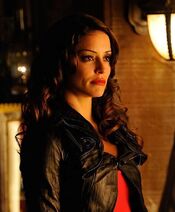 While The Morrigan doesn't believe that Bo's as ignorant as she says, The Ash is unsure, and he wants the two of them to work together to solve the problem. The Morrigan doesn't really want to, and she thinks that if they'll be ridiculed by the other Fae counties for having Bo hidden from them, that it'd be best to kill Bo and get it over with. She views Bo as a threat as long as she is neutral, so the Ash decides that they force her to choose a side, the old fashioned way.

The Morrigan witnessed Bo killing a Troll and defeating a Pain Eater. The Morrigan is furious when Bo decides to remain neutral, and still wants to kill her as she's more of a threat than she thought. Trick though manages to convince her and The Ash to leave her alive for the time being, as a means to unravel her mystery. Mayer, a Dark Fae, reveals that all the money he collects by using the luck of certain humans to win betting scores, goes straight to The Morrigan.

When Dyson is accused of murdering a Dark Fae Redcap named Ba'al, he asks for sanctuary at the Dal. The Morrigan brings two bodyguards with her as she goes to the Dal and demands for Dyson to be handed over. Upon refusal she has her bodyguards attack Bo and Dyson. Trick brings out a shotgun and tells The Morrigan that she can leave, though she vows that sooner or later she will "have Dyson's head for her wall". Dyson eventually decides his friends are sacrificing enough for him, and he goes to Vex's night club, Carpe Noctem. There he is captured by Vex and The Morrigan. Dyson is chained up and Vex tortures him while Silas watches as The Morrigan tries to interrogate him, though to no avail. When she starts to get bored she orders Dyson's death, but Bo, Kenzi, and Portia interrupt. They expose Silas as being the murderer over his love for Portia and to prevent Ba'al from killing her and that he framed Dyson. The Morrigan releases Dyson and watches as Vex begins to torture Silas.

When Kenzi's childhood friend Nate attempted to apply for an audition with The Morrigan's agency, Kenzi made a deal with The Morrigan to spare Nate and she rejected the audition in exchange for a future favour from Kenzi.

In Season 4, Evony convinced Lauren to join the Dark Fae and granted her a personal liberty that was denied to Lauren under ownership by The Ash, in return for which Lauren would serve as the scientist and physician for the Dark and do the The Morrigan's bidding. Unbeknownst to Evony, Lauren joined the Dark deliberately to help Bo behind the scenes.

In Of All the Gin Joints, after Evony made a surprise visit to Lauren when she was getting ready to move out of the Light Fae apartment and into one provided by the Dark clan, they flirted and kissed before Evony departed. Lauren, however, did it to obtain a sample of Evony's DNA.

In Origin, Lauren had created a biology-mutating serum with Evony's DNA and, taking advantage of Evony's narcissim, she offered herself to her. Evony ingested the serum while having sex with Lauren and was transformed into a human, with all her abilities gone.

In Let Them Burn, Evony is seen holding hgh tea in her mansion to raise money for research in curing her unnamed disease, stating "well i figured if i can't fae myself out of this disease, i might as well throw money at it. As committee chair i've raised over 100,000,000 $ (Dollars) in 10 days"

Evony presents great talent for malice and cutting remarks. In addition to a clever and manipulative streak which she is able to use to exploit both Fae and humans alike; a character trait that shines through her abuse of human artists, stealing their royalties to service her own goals.

Marquise is quick to remind anyone she views as a threat or disrespectful of her ability and willingness to see them suffer when they step out of line making her a feared Fae leader.

As a Leanan Sidhe, Evony has the supernatural skill of absorbing the talents from artists and musicians, which fits well for her profession as a talent agent, seeking underlying talent and acquiring them for her benefit.

In Into the Dark, it was revealed that she can also drain talents to the point where recipients are literally reduced to a puddle. (This ability does not seem to be a common trait of a Leanan Sidhe, as even Trick did not seem to be aware of it.)

Retrieved from "https://lostgirl.fandom.com/wiki/Evony_Fleurette_Marquise?oldid=45395"
Community content is available under CC-BY-SA unless otherwise noted.