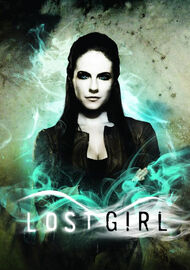 The last episode of Lost Girl premieres on Showcase at 9:00 p.m. The series finale will be accompanied by a live tweet with the cast.

Season 5 premieres in the United Kingdom and Ireland on Syfy UK at 9 p.m.

In Australia, Part 2 of Season 5 premieres on Stan.com.au.

Showcase booth at Fan Expo gives fans the opportunity to record their own personal "Thank You" message to the cast and crew of the show.

The premiere episode of Season 5 Part 2, episode 5.09, is released online for a limited time (14 days) on the following digital platforms:

Videos expire on all platforms on Thursday, September 3 at 11:59 pm ET.

Prior to the broadcast premiere of new episodes, viewers can also catch up on Seasons 1 – 4 exclusively on Canadian streaming service, shomi. The first half of Season 5 (Part 1) is currently available on Showcase.ca only.

After broadcast of Part 1 mid-season finale episode End of Faes, Syfy announced in a preview of Part 2 that Lost Girl will return in 2016.

Anna Silk is nominated for a 2015 Golden Maple Award by The Academy of Canadians in Sports & Entertainment - Los Angeles (ACISE-LA). Awards presented on Wednesday, July 1, 2015.

"Best Actress in a TV Series Broadcasted in the US"
Anna Silk – Lost Girl, US Network: Syfy
http://www.etcanada.com/blogs/etc_137805/canadian-stars-honoured-with-noms-for-golden-maple-awards/tv

Season 5 premiered in Australia on Stan.com.au.

Season 4 premiered in Australia on Stan., as streaming content from the new online subscription service.

Best Performance by an Actor in a Featured Supporting Role in a Dramatic Program or Series
Lost Girl - In Memoriam, Origin
Paul Amos
http://www.academy.ca/getmedia/eebf59d3-3966-4172-973d-ca194be6c13e/2015_CSA_-Television_-Nominations.aspx?ext=.pdf

Bo is named one of the top 100 sci-fi characters of all time by the British Film Insitute.

Lost Girl is the subject of a scholarly panel at the 2014 Film & History Conference (hosted by the University of Wisconsin–Madison). Location: Madison, WI, USA.

PANEL 3016 Queer Film and Television I: Low Budget, High Aspirations: Lost Girl and the Paradoxes of Representation in a "Post-Queer" Universe

Showcase/Shaw Media and Anna Silk announced that Season 5 will be the Final Season.

To conclude the series, an additional three episodes have been added for a total of 16 episodes. The season will be split into two parts with the first eight episodes beginning in 2014 — followed by the second eight episodes later in 2015.

Season 4 becomes available on Netflix USA for streaming and rental of DVD and Blu-ray.

[ includes interviews where Lost Girl is mentioned regardless of title ]

23 Underrated Netflix Shows You Should Totally Be Watching
May 25, 2016. BuzzFeed

A farewell interview with Anna Silk on the end of "Lost Girl"
February 8, 2016. AfterEllen

The 17 Most Tear-Jerking Friendships from Science Fiction and Fantasy
February 1, 2016. io9

Should Bo Or Lauren From "Lost Girl" Be Your Girlfriend?
November 30, 2015. Buzzfeed

9 reasons why Lost Girl is one of the best shows out there for ladies and all others in need of empowering
September 22, 2015. Some Nerd Girl

A Woman You Should Meet: Anna Silk
June 2015. Sharp Magazine

Prime Time Sci Fi TV: The 2014-15 Season Wraps Up with the Finales for The Flash, iZombie, and Supernatural; Lost Girl and Bitten Get a Schedule Shift
May 16, 2015. Cancelled Sci Fi

Exclusive: Zoie Palmer on the Final Season of Lost Girl
May 1, 2015. SciFi Vision

Lost Girl at C2E2: An Interview with Paul Amos and Emmanuelle Vaugier
April 25, 2015. The Geekiary

Advance Review: The Final Season of Lost Girl is Still As Kick-Ass as Ever
April 16, 2015. SciFi Vision

Exclusive: An interview with Anna Silk about the end of "Lost Girl," Doccubus and more
April 14, 2015. AfterEllen

Ksenia Solo on Kenzi, her new 'Turn' and possibly breaking up Cosima and Delphine
April 10, 2015. Cinefilles

How the star of Lost Girl, actress Anna Silk, is creating a brighter future for girls!
February 25, 2015. Because I am a Girl (Plan Canada)

The women of Lost Girl

Ksenia Solo On Leaving 'Lost Girl,' Her Fans, And What She's Going To Do Next
December 9, 2014. Huffpost TV Canada (The Huffington Post)

Anna Silk talks about the fifth and final season of 'Lost Girl'
December 8, 2014. The GATE

To Hell and Back - Interview with Lost Girl's Anna Silk
December 5, 2014. SciFiAndTvTalk

Get ready for the "Lost Girl" final season with this preview and primer
December 5, 2014. AfterEllen

Lost Girl's Rick Howland: There Are Many More Pages to Trick's Story
December 4, 2014. The Televixen