Death Didn't Become Him is the eighth episode of Season 2. 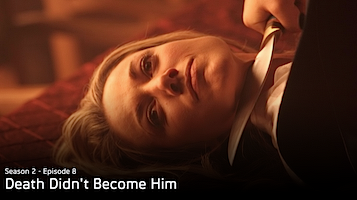 [ The following plot recap was imported from the Syfy (U.S.) website. ]

Bo and Dyson find themselves working together when Trick asks a favor. Trick's friend, Donny, went to visit his recently dead husband's grave, only to find it empty. The corpse of the graveyard groundskeeper points them to a Dark Fae butcher, a man who cuts up humans for his Dark Fae clients. Under duress, he tells them that he butchered the groundskeeper for a lich, an Egyptian near-god who has found the secret to eternal life. Dyson and Bo hurry to the location the butcher gives them.

The lich is there, cavorting with a company of risen dead including the missing husband, Christophe. Each of the undead has a certain skill that the lich feeds off of: intellectual prowess, bloodlust, gourmanderie. Now Christophe will give him the vicarious thrill of the joy of dance. The lich refuses to return Christophe, but invites Bo to come back with a guest for a party - no Light Fae, natch. Bo realizes that this man, who's been alive for thousands of years, may know something about the gift that The Morrigan gave Bo as a key to unlocking Lauren's comatose girlfriend, Nadia. Lauren comes along, and brings The Morrigan's gift: a rusty nail.

Hale, meanwhile, has taken over a security detail of a very important, very snotty teenager named Tori. When Kenzi learns of the bevy of restrictions the girl's mom has placed on her - no booze, no boys, no coffee - she makes Tori her personal project, and it's not long before the girls slip from Hale's watchful eye.

At the lich's soiree, Bo is making no headway. He won't tell her what the nail means, or give Christophe back. Bo has heard that lichs store their life force in a vessel, and destroys a painting of him thinking it might weaken his hold and set Christophe free. Instead, it's just a painting, and her actions enrage the lich so that he chains both Bo and Lauren, ordering Bo to feed on Lauren, or he will kill them both. Bo refuses, and the lich telepathically orders one of his minions to shoot her in the stomach. He then has Lauren dragged to the table, where he prepares to eat her unless Bo agrees to his terms.

Bo struggles to stand until a sharp, blue light appears in her eyes. Rising to her feet, she pulls the life force out of all of the undead, and most of it out of the lich. She declares that she could be more powerful than all Fae combined, then collapses to the floor. Lauren helps her up, but it's clear that Bo had no awareness of what she did - it was as if she was moved by a force unknown. She breathes life back into Christophe, then demands the answer to the puzzle of the nail. The lich tells her that it's the mark of a shaman's curse. Remove the nail from the piece of wood with Nadia's name on it, and she will most likely revive. With that, Bo lets the immortal die and returns Christophe to his husband.

But speaking of dying...Kenzi tried to sober Tori up by giving her coffee, and it made the girl's heart stop. Hale is getting ready to flee the country to escape her mom's rage when Dyson saves the day by pounding on the girl's stomach. Simple explanation: Tori's allergic to coffee, and can only be revived when someone else helps her second heart restart. Duh. Not a word will be said to Tori's mom, of course.

PLOT IS TEMPORARY MEASURE COPIED FROM SYFY. PLOT NEEDS TO BE REWORKED, IMPROVED, AND TAILORED FOR WIKI.