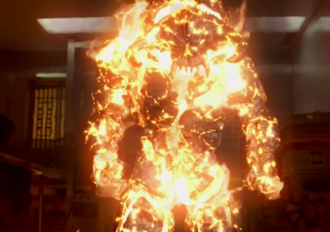 A Cherufe is an Under Fae composed of magma.

A Cherufe is immensely powerful. It can cover swaths of lands in lava and disguise itself as a rock formation. When a cherufe touches someone, it sets off a chain reaction and the victim spontaneously combusts.

When the Light Fae Noble families reneged on a deal with a cherufe, it caused Mount Vesuvius to erupt and destroy Pompeii in 79 AD, wiping out Clan Scafati.

It is said that Cherufe inhabit the magma pools found deep within Chilean volcanoes and are the source of earthquakes and volcanic eruptions. Cherufe are also said to be the source of magicians ardent stones (meteorites and volcanic stones) that cause damage in volcanic regions. The only way to abate the Cherufe's appetite for destruction was to satiate the beast's taste for human flesh by throwing a sacrificial victim into the bowels of its volcanic home. Much like the European dragon, the Cherufe's preferred delicacy came in the form of virginal maidens.[1]

Retrieved from "https://lostgirl.fandom.com/wiki/Cherufe?oldid=29873"
Community content is available under CC-BY-SA unless otherwise noted.